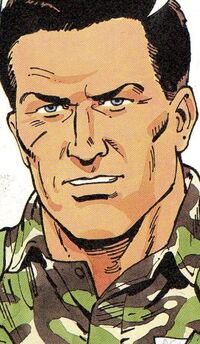 The individual known only as Action Man (who may or may not be the original Action Man) is an operative of the World Amalgamated Military Strike Squad serving under Colonel Jonas Carson. He is apparently the squad's top operative, an expert in all forms of combat, air and sea rescue, intelligence gathering and a noted adventurer in his own right, and is the world's first and best line of defence against the machinations of the evil Dr. X and his cohorts in the Council of Doom.

In at least one account, Action Man is a member of what seems to be an updated version of Action Force.

Retrieved from "https://britishcomics.fandom.com/wiki/Action_Man_(Modern)?oldid=78013"
Community content is available under CC-BY-SA unless otherwise noted.