The Action Force strip, based on a popular and long-running line of toys and concerning the exploits of an elite United Nations-backed peacekeeping force , first appeared in IPC's war themed comic Battle from October 1983. A number of creators including Gerry Finley-Day, Geoff Campion and Ron Turner worked on the series, which even made it onto the comic's masthead, the title becoming Battle Action Force. Unfortunately, in early 1987 IPC lost the licence to publish Action Force to Marvel UK, replacing the strip in Battle with the similarly themed but otherwise unrelated original strip Storm Force.

From 7th March 1987 Action Force — now heavily revamped and closely based on Marvel's American title G.I. Joe — was launched as a Marvel UK title, with few direct ties to the continuity of the previous incarnation at IPC. This was principally because the Action Force toy line had been swallowed up by the G.I. Joe range, losing all its UK-originated characters. However, the writers did attempt to tie the two together by claiming that the British Baron Ironblood had reinvented himself as Cobra Commander, and the Baron's Red Shadows and their leader the Black Major would also reappear later). Kev Hopgood drew several episodes of the strip from March to August 1987, and Anthony Williams, Ian Rimmer, Bryan Hitch, Jerry Paris, Smudge and Staz Johnson also worked on it.

The Action Force series, containing a mix of UK-originated strips, re-edited US reprints from G.I. Joe (with the names and some details changed to make them more Anglocentric) and (for a brief period) backup strips featuring Marvel's Master of Kung Fu, ran for 50 weekly issues until 13th February 1988 before being cancelled and merged with Transformers with issue #153 of that title (the Transformers themselves had earlier appeared in a crossover storyline in Action force, written by Simon Furman). Action Force's humorous back-up strip, Combat Colin, also transferred over to Transformers. Subsequently, an Action Force Monthly title in the American colour comic format ran for 15 issues from June 1988 to August 1989. Marvel UK also published an Action Force Annual (featuring relettered stories reprinted from G.I. Joe) in 1988, and Action Force also appeared in the short lived anthology title The Incredible Hulk Presents. 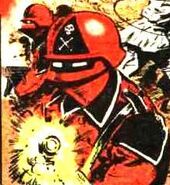 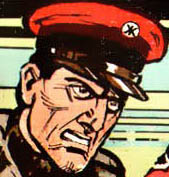 The team prepares to fight Cobra

The Incredible Hulk Presents #6
Add a photo to this gallery
Retrieved from "https://britishcomics.fandom.com/wiki/Action_Force?oldid=146954"
Community content is available under CC-BY-SA unless otherwise noted.