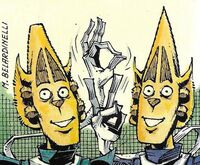 Ace Garp was the proprietor of the Ace Trucking Co., an interstellar haulage outfit which basically consisted (originally) of himself, his "biffo" G.B.H (Dead), his engineer Feek the Freak and one ship, the Speedo Ghost (controlled by a computer called Ghost). An opportunistic character with a nose for money, Ace nonetheless had a knack for getting himself and his friends into awkward situations, but he always managed to extricate them somehow (though on one occasion, he lost the point on his head). He eventually expanded his organisation to include a second ship, Old Peart II, run by his old friend Fatty Arkl.

Ace's eventual downfall came when his arch-enemy and long-term rival Jago Kane arranged for him to be duped into believing he had a terminal disease. Rather than die slowly, Ace elected to go out in a blaze of glory by taking the 'Nightlight Flight', piloting his ship into a sun. His crewmates discovered Kane's deception too late to save Ace, but exacted a brutal revenge on Kane.

Ace, however, did not die, but ended up in a parallel universe where he spent some months imposing himself on his own alternate universe duplicate and duplicates of his crew. Eventually tiring of Ace, his double successfully found a way of sending him home. Arriving back in his own universe, though, Ace discovered that Feek and G.B.H. had turned Ace Trucking into a successful interplanetary concern in his absence. When he attempted to take over operations, his former crew told him that since he was legally dead and they had inherited the business, they wouldn't allow him to screw things up for them again. Ace lost his temper and ended up in jail, vowing to somehow regain control of his company.

Scarf (alive, though apparently not sentient — much like its owner).

Not really his style, although he sometimes carries a gun.

In later stories, Ace lost the point on his head. When he teamed up with his parallel universe counterpart, this provided a useful means of telling them apart.

Retrieved from "https://britishcomics.fandom.com/wiki/Ace_Garp?oldid=160332"
Community content is available under CC-BY-SA unless otherwise noted.