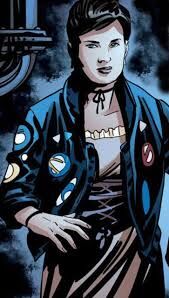 A streetwise teenager with serious issues, Ace was picked up by The Doctor on Iceworld after being deposited there by a freak time storm. It later turned out that she was actually a pawn of an evil intelligence from the dawn of time, but she didn't let it get her down. She travelled with the Doctor for several years (sometimes in the company of archeologist Bernice Summerfield), and also later spent some time as a spacefaring mercenary according to some accounts.

There are contradictory accounts of Ace's eventual fate. According to one, she was killed in an explosion while destroying the alien Lobri (Doctor Who Magazine comic strip Ground Zero). Another appears to suggest that she eventually founded a charity called A Charitable Earth (note the initials).

Nitro Nine, an explosive compound of her own design which she stores in old deodorant cans. Also occasionally uses a supercharged baseball bat.

Ace was named after Dorothy Gale, heroine of The Wizard of Oz.

Retrieved from "https://britishcomics.fandom.com/wiki/Ace_(Doctor_Who)?oldid=141116"
Community content is available under CC-BY-SA unless otherwise noted.