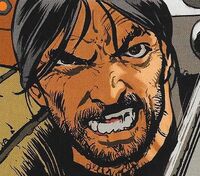 Abslom Daak was a convicted mass murderer on Earth of the future, who was given a choice of sentence; face summary execution, or be sent into space on a suicide mission as a 'Dalek Killer', and take as many Daleks with him as possible before being exterminated! Daak chose the suicide mission, but found something to live for when he met the woman Taiyin. When Taiyin was killed by the Daleks, a devastated Daak vowed to get revenge by killing "every damned, stinking Dalek in the galaxy!" He gathered a group of old allies, his 'Star Tigers' (Vol Mercurius from Earth, Salander of Draconia and Harma the Ice Warrior), to assist him, aboard the modified attack ship called the Kill Wagon.

Later, Daak's crew were apparently killed and Daak himself seemingly died destroying a Dalek Death Wheel, but it has since been revealed that all of them actually survived. Daak has crossed paths with the Time Lord known as The Doctor several times.

Daak made a brief cameo appearance in an Axel Pressbutton story in Warrior magazine, encountering Axel at a bar. Steve Moore wrote both characters.

Retrieved from "https://britishcomics.fandom.com/wiki/Abslom_Daak,_Dalek_Killer?oldid=154800"
Community content is available under CC-BY-SA unless otherwise noted.