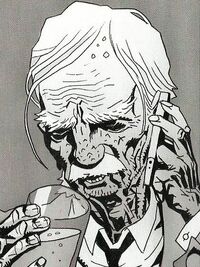 The old-school police inspector Harry Absalom was the main character of the 2000 AD strip Absalom. His beat was a twenty-first century London much like our own, apart from all the supernatural shenanigans (there are even posters advertising Dredd). Harry wasn't just your average grumpy alcohol-dependent copper: he led a team tasked with policing the terms of the Accord, a treaty between the British Crown and Hell. He was haunted by the ghosts of dead colleagues, his clothes looked like he put them on in 1991 and hadn't removed them since, and he also had a special kind of cancer that wouldn't kill him as long as he did what his bosses wanted. His life was not a bowl of cherries. But on the other hand, he was a God-awful old git...

Average strength of an old bloke with a debilitating terminal illness.

Ancient car with the numberplate A. C. A. B.

His name was originally spelled 'Absolam'.

Retrieved from "https://britishcomics.fandom.com/wiki/Absalom?oldid=138949"
Community content is available under CC-BY-SA unless otherwise noted.