The Man With the Multi-Storey Mind 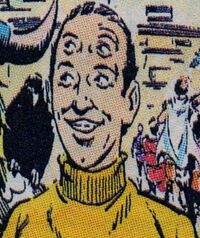 Abelard Snazz was a mutant genius with two brains (which worked as one) and two sets of eyes. Egocentric and utterly convinced of his own brilliance, Abelard nonetheless tended to be unlucky as his ambitious schemes tended to spiral out of his control with unexpected consequences.

Hired by the rulers of the planet Twopp to solve the planet's rampant crime problem, Abelard Snazz (then President of Think, Inc.) and his robot lackey Edwin created robot police, but the robots were too effective. Having arrested every criminal on the planet, they began arresting innocent citizens for crimes against the laws of etiquette, grammar and good taste, so Snazz (working from a bizarre leap of logic) created robot criminals for the police to arrest, instead.

Unfortunately, the civilian population became caught between the two sides, until Snazz created robot civilians to suffer in their place. With Twopp now hopelessly overcrowded by robots, the native populace were forced to evacuate, and when Snazz offered to design a robotic planet for them as a new home, he and Edwin were ejected into space by their enraged clients.

The Return of the Two-Storey Brain

Rescued by unlucky gambler Hoolio Moolibar, who has just lost his life savings on the casino world of Beteldryve, a grateful Snazz created a time machine to make himself and Moolibar rich by betting on games they had already seen the outcome of.

Unfortunately, Snazz then lost all their money to an unscrupulous hotel doorman on a rigged coin toss. An irate Moolibar used the time box to send Snazz and Edwin back in time to the point where he rescued them from deep space, then left them there.

The Double-Decker Dome Strikes Back

Frozen in space after a meteorite ruptured his suits thermal seal, Snazz was thrown into suspended animation and rescued two thousand years later by a group of depressed Vikings from the planet Farbus. Edwin was corroded beyond hope of repair, so Snazz ejected him from the Farbian ship's garbage disposal before finding himself unexpectedly elevated to godhood by the Farbians, who believed him to be the Great God Toglub of the Two-Fold Gaze.

Snazz accepted his apotheosis and set himself to the task of solving the Farbians' major problems: an energy crisis caused by lack of fuel, an economic crisis caused by the decimation of their planet's vegetation by Farbian crottle weed, and an impending collision with a black hole. Snazz solved all three problems by harnessing the positive mental vibrations of the Farbian crottle worms infesting the weeds (the most saintly creatures in the universe), transforming their good thoughts into an unlimited supply of valuable energy (solving both the fuel crisis and the economic crisis) and creating a ship powered by crottle worms to take him to the black hole and stitch it up with faster-than-light particles.

Unfortunately, when the Farbians began praising the worms as well as Snazz, the jealous Snazz dismissed the worms' contribution, calling them "mindless invertebrates." This prompted the resentful worms to stop thinking good thoughts, causing the ship to lose power and be sucked into the black hole.

Finding himself in an immigration authority office inside the black hole, Snazz (as Toglub) was despatched to the Bide-a-Wee Twilight Dimension for disinherited deities, where he encountered Odin, Zeus, Thoth and their various pantheons, all languishing without believers to sustain them. Snazz took the gods to Ursa Minor and, displaying a startling talent for promotion, orchestrated a religious revival, giving all the gods new jobs (Ares, for instance, becoming the god of Space Invaders machines, and Demeter the goddess of health food shops).

Unfortunately, the people began to sacrifice each other to the gods and make war in their names, and when Snazz protested at this, he was banished by Odin to a "realm of bleak isolation" which he could only escape by solving a Rubik's Cube of his devising. Snazz laughed at this, since there wasn't a cube built that he couldn't solve in under thirty seconds, and sat in the middle of what appeared to be a gigantic flagstoned floor demanding to see the cube so that he could solve it. Unfortunately, he had not worked out that he was in fact sitting on the cube, which was giant sized...

The Multi-Storey Mind Mellows Out

Rescued six million years later by two hippies working for Amnesty Galactic (when he was just about to finally solve the cube after having spent many thousands of years mining metal and building a crane by hand in order to manipulate its faces) Snazz was returned to Earth, now a utopian society. Dismayed at having nothing to do, Snazz created giant robot tennis players to save the population the trouble of playing tennis themselves.

Unfortunately, Snazz built his robots using personality chips patterned on some rather highly strung 20th century tennis players (one of them John McEnroe), who began to fight and destroy the stadium. The no longer mellow hippies hurled Snazz into a giant jacuzzi, hoping to drown him.

Teleported away just before he hit the water, Snazz found himself on trial before the Manager of the Universe for all the chaos he had caused. However, the trial turned out to be a ruse; in fact, Snazz had been brought there for a special birthday celebration, held for any citizen of the universe who passed the six million year mark! The Manager gave Snazz a wrapped present which he assured him was his "perfect gift."

Unfortunately, when Snazz unwrapped the parcel, expecting riches, he was disappointed to discover that he had been given a rebuilt Edwin! Snazz was last seen repeatedly pummelling the sycophantic robot, which continued to punctuate each blow with his customary cry of "You're a genius, master!"

For a genius, he has a remarkable lack of foresight. Also, whenever he gets a headache he gets it twice.

A 'virtue converter' which transforms good thoughts into energy. (Has to be powered by Farbian crottle worms, because most of Snazz's thoughts are about his own brilliance.)

Wrist-watch which is hastily converted into a neuron-whisk.

Snazz, the first recurring character created for 2000 AD by Alan Moore, first appeared in a two part story in the Ro-Jaws' Robo-Tales series, and then in one of Tharg's Future Shocks before receiving his own series. After a 37 year absence, he returned in prog 2206 in a one-off story by Paul Cornell, the first time he was ever written by anyone other than his creator.

Retrieved from "https://britishcomics.fandom.com/wiki/Abelard_Snazz?oldid=160283"
Community content is available under CC-BY-SA unless otherwise noted.