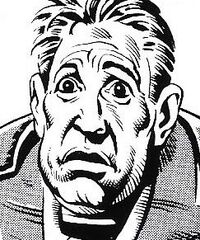 Aaron A. Aardvark, alias Eric Plunket, is a character from the 2000 AD strip Judge Dredd. An unremarkable citizen of Mega-City One, he changed his name to Aaron A. Aardvark in order to be the first person listed in the phone book. This rather odd ambition proved to be his undoing when the insane Chief Judge Cal began executing the citizenry in alphabetical order. Sadly, Judge Dredd's eventual defeat of Cal came too late to save Aaron.

Aaron's was the first name in the vid-phone book for sector 1. The last was Zachary Zziiz.

Retrieved from "https://britishcomics.fandom.com/wiki/Aaron_A._Aardvark?oldid=137950"
Community content is available under CC-BY-SA unless otherwise noted.