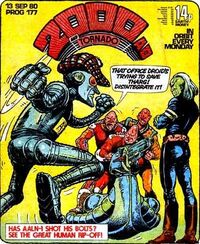 Aaln-1 was the assistant editor of 2000 AD, the Galaxy's Greatest Comic, and right-hand droid to Tharg the Mighty in the mid 1970s. In 1980, he perished heroically trying to save his beloved leader (who didn't actually need saving, but still) from the villainous Dictators of Zrag. Tharg immediately replaced him with another droid, named Burt.

Aaln-1 was the robotic alter ego of writer Alan Grant, who was actually 2000 AD's editor at the time. When Grant stepped down as editor, he wrote Aaln-1 out of Tharg's fictional world by giving him a heroic death in the two part story The Great Human Rip-Off in 2000 AD progs 176 and 177 (8th and 13th September 1980).

Retrieved from "https://britishcomics.fandom.com/wiki/Aaln-1?oldid=57739"
Community content is available under CC-BY-SA unless otherwise noted.