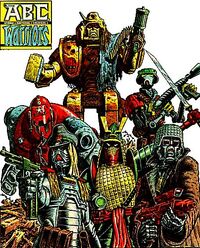 Origins of the Warriors

The ABC Warriors were a contingent of robot soldiers designed by Howard Quartz of Quartz Industries to be resistant to Atomic, Bacteriological and Chemical warfare, which humans could not withstand. They were originally created to repulse the Volgan invasion of Britain, with the first Warriors created being the Hammersteins, the Mark III War Droids (the Mark I and Mark II versions having proven unsatisfactory). The prototype, Hammerstein himself, was to all intents and purposes the original ABC Warrior, and initially all the other robots resembled him, though as the war progressed a number of different models were created including the Robo-Paratroopers.

Towards the end of the Volgan war, a core group of ABC Warriors, an elite commando squad, was formed under the leadership of Sergeant Hammerstein. Other original members included the sniper Joe Pineapples and the bizarre Happy Shrapnel, and they later recruited the robot wizard Deadlock and the grotesque Mongrol ("Hey! Mongrol not grotesque!"), before taking down the sadistic Volgan war robot General Blackblood whom, Hammerstein was disgusted to learn, his superiors intended to reprogram and induct into the Warriors. Finally, the Volgan War was ended by the last and greatest ABC Warrior, Steelhorn the indestructible robot... whom the high command immediately betrayed and tried to destroy in a furnace, as he would serve no purpose in peacetime.

The attempt failed, Steelhorn instead becoming the molten monstrosity known as 'The Mess'. The seven Warriors (nicknamed 'The Meknificent Seven') were subsequently called back together by the mysterious Colonel Lash and sent to Mars, to make the planet safe for human colonists, facing threats such as the monstrous Golgotha. With the Mars mission successfully concluded though, the Warriors disbanded and went their separate ways, Happy Shrapnel apparently dying in a bar brawl on Mars sometime prior to the mission's conclusion and The Mess being left on the Red Planet, having been absorbed into the operating system of the giant robot Mad George. Hammerstein subsequently became a member of Howard Quartz's Ro-Busters disaster squad for a time, while Joe Pineapples joined the police as a firearms instructor, and the remaining Warriors departed for parts unknown.

Rebirth of the Warriors in Nemesis

Centuries later, the Warriors were reformed by the alien Nemesis the Warlock to aid him in his battle against the forces of the evil human Empire of Termight. Nemesis first recruited Hammerstein and his associate Ro-Jaws, then rounded up Joe Pineapples, Mongrol and Blackblood, all of whom had been living on the free robot world of Mekka. To round out the squad, he also inducted two newer comrades of Hammerstein's, the sniper Mad Ronn and the robot Samurai Hitaki; Nemesis himself claimed that he was Deadlock, the wizard having supposedly merged with Nemesis, the living incarnation of his god, Khaos, though this was later proven false.

Leaving Nemesis, and Return to Their Own Series

The Warriors served under Nemesis for some time, though both Mad Ronn and Hitaki were killed, forcing Nemesis to induct the deranged robot bulldozer Mek-Quake as a replacement. When Nemesis' son Thoth caused potentially catastrophic damage to the Black Hole which enabled interstellar travel though, Nemesis sent the Warriors alone into the Time Wastes to repair it, and they have never rejoined his service, though they have encountered him occasionally. The Black Hole mission saw the return of Deadlock, and brought a new, temporary member for the Warriors in Terri, a human woman who believed she was a robot, but she died shortly afterward.

Subsequently, Deadlock took control of the Warriors, using them to spread the influence of Khaos throughout the Galaxy and recruiting a new seventh member, the former robot waitress Morrigun. Ultimately though, the Warriors realized that if they were to embrace Khaos completely, it meant no longer taking orders from Deadlock or anyone else, and they disbanded again.

The Warriors have since reunited to return to Mars and try to restore peace to the troubled planet. Morrigun was killed early on, but the Warriors were reunited with their restored comrade, Steelhorn, and while Blackblood and Mek-Quake have both since betrayed and left them, they have also been joined by a previously unknown old comrade from the Volgan War, Zippo. The current membership of the team consists of Hammerstein, Joe Pineapples, Mongrol, Deadlock, Steelhorn, Zippo, and Happy Shrapnel, who has now also been revealed to have survived, and to have secretly served for some time as their armourer, under his new name, Tubal Caine. Unfortunately, their self-serving creator, Howard Quartz, has also resurfaced, and Mek-Quake has re-entered his service.

Lots, much of it built-in.

The ABC Warriors were created by Pat Mills, who has written the majority of their appearances. Artists who have worked on the strip include Kevin O'Neill, Bryan Talbot, Simon Bisley, Mike McMahon, Brett Ewins, Brendan McCarthy, Henry Flint, John Higgins, Steve Dillon, Clint Langley, S.M.S., Boo Cook and Kevin Walker. Remember these names: there will be a short test later to check if you were paying attention. Alan Moore wrote the ABC Warriors story "Red Planet Blues" (drawn by Steve Dillon) in the 1985 2000 AD Annual.

In 1990, an eight-issue ABC Warriors US format reprint series was published by Fleetway/Quality, reprinting (in black and white) both the original introductory series and the black hole mission. The Warriors also featured as back-up strips in other, earlier Quality Comics titles. Titan Books reprinted their original series and their first revived series in four volumes between 1983 and 1988 (see ABC Warriors Vol 1), and there have since been other collected volumes from Rebellion (see ABC Warriors: The Volgan War Vol 1, ABC Warriors: The Black Hole Vol 1 1).

ABC Warriors and its parent strip, Ro-Busters, both form part of a shared universe which also includes the 2000 AD strips Nemesis the Warlock, Judge Dredd (and its various spin-offs), Flesh, Harlem Heroes, Invasion! and Disaster 1990!, and possibly also the Tornado strip The Lawless Touch. 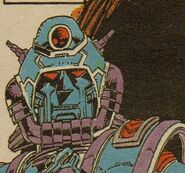 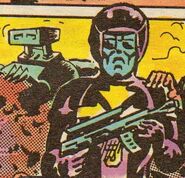 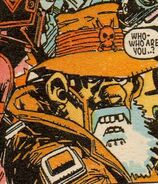 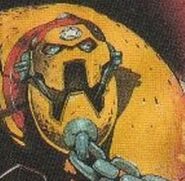 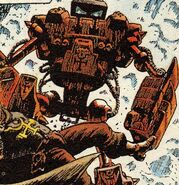 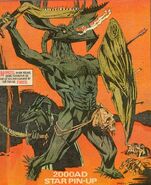 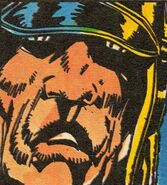 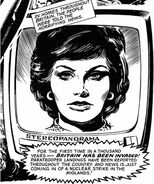 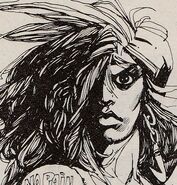 Ruby YumYum Bluck
Add a photo to this gallery
Retrieved from "https://britishcomics.fandom.com/wiki/ABC_Warriors?oldid=123405"
Community content is available under CC-BY-SA unless otherwise noted.