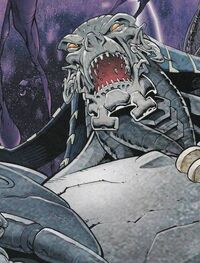 The eponymous protagonist of the comic strip A.H.A.B. was a robot inhabited by the uploaded consciousness of a dead starship's captain. He was on a self-appointed mission of vengeance against the Kohenyu, gigantic extra-dimensional alien creatures whose brain chemistry potentially provided the only antidote to a deadly virus threatening to wipe out humanity in 2086. A science team led by a woman named Ishmael ('Izzy') had been sent to find the cure, but A.H.A.B. had priorities of his own...

He is a weapon.

Retrieved from "https://britishcomics.fandom.com/wiki/A.H.A.B.?oldid=84410"
Community content is available under CC-BY-SA unless otherwise noted.